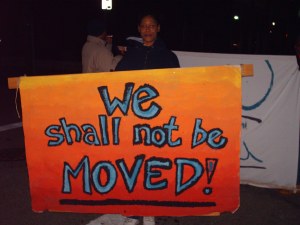 Even before we had an official Homeless Congress, the Coalition encouraged folks experiencing homelessness to speak out. 2008 Drop Inn Center Rally, 30 year anniversary of the midnight move.

If you or someone you know is interested in joining the Homeless Congress, Call 513-421-7803 Ext 15 and ask for the current Civil Rights Outreach Coordinator.

Recent reports have put Cincinnati rent raises at the very top in the nation. “We’re looking at (overall) rents that more than half of …

Meet on the Music Hall side of Washington Park at 5:30

For the first time, in 2020, we did not give any awards because of our inability, due to the pandemic, to gather all our folks together …

Join us for our Annual Fundraiser with special guest host, Key Beck! This year, we are hosting Trivia Night and will honor those who …

This November, engage with us as we highlight the resilience of the Over-the-Rhine People’s Movement, the work of the Homeless Coalition and our member …

At midnight on Saturday, the federal eviction moratorium ended, threatening the lives of millions of Americans, including many here in Cincinnati. Homelessness will be …

Affordable Housing Movement Will Continue March Until We Reach Success For Immediate Release:  May 4, 2021From:  Cincinnati Action for Housing Now Today, we have …

Everyday at the Homeless Coalition, we demand access to affordable housing, livable wages, and housing protections to everyone in our community. We recognize that …

The Homeless Coalition is hiring one AmeriCorps VISTA service member to organize tenants in eligible Project-Based Section 8 properties. This is a one-year contract …

The City of Cincinnati is experiencing a critical shortage of affordable and accessible housing, and the economic collapse from COVID 19 has made this …

Our Affordable Housing Trust Fund policy change initiative needs 9000 signatures to be on the ballot in May 2021! This initiative will require the …

Get your calendars out! The Coalition’s Education Program is excited to announce our public education program for July! All events are open to the …

The Greater Cincinnati Homeless Coalition is proud to present our educational program on a online platform! Want a Speaker for your class? Want to …

Governor DeWine has issued an order to protect evictions and foreclosures on commercial properties. Tenants have not received the same rights! It is time …

Although we are currently unable to meet in person with newly established and actively engaged tenant groups, we must still continue building and sustaining …

There are 1800 people in congregate housing at this time in Cincinnati. We are all being ordered to maintain social distance from one another …

Burnet Ave. Tenants to Call on City Council to Vote Yes on a Council Motion Supporting Their Fight To Not Be Forced Into …

Join us for an evening of dancing and live music featuring The Cincy River Rats from 8pm to 10pm! The evening will also include …

This is the ordinance proposed by the Covington, Kentucky Mayor and Commissioners:  City of Cov Proposed ES Ordinance Below is our letter to Mayor Meyer, …

Every year the Coalition celebrates the accomplishments of its members, the community, and the supporters at our Annual Dinner and Award Ceremony. This has …

Download the PDF version of the flyer below here:  March Flyer  You can use it to print and pass out or hang or to …

The Homeless Coalition’s Social Justice Walking Tour focuses on the historical and contemporary struggles and successes of the Over-the-Rhine People’s Movement. Tours take you …

Want to volunteer? Keep up with local news. Connect with organizations. Find out how to connect, where the events are, and who is doing …

From Renter’s Rights to the Homeless Bill of Rights, many of us are in the dark about the legal processes, procedures, and regulations that …

Know Your City: Resource Event provides those that are currently, recently or on the verge of homelessness or just in need of help and …

Are you a business or corporation that would like assistance with an issue that you are having, or would you just like to make …

We will talk about the causes of homelessness, dispel some of the myths, and reflect on how to get involved and be a part of the solution.

You can sign up for any or all of our empathy-building, stereotype-breaking, fact-finding, eye-opening activities online today